Researchers at Scotland’s Rural College have begun a trial to test the effectiveness of using a CT scanner for selecting rams which sire lambs with an increased yield of useable meat. They believe their non invasive technique is capable of delivering some £8.00 extra per lamb (based on an average national retail price of £13.3 per kilo). SRUC has provided a CT scanning service to pedigree sheep breeders for more than a dozen years, and for the past few years they have also done so using a mobile CT scanner. This has helped researchers develop methods for accurately measuring carcass or muscle weight and fat content of live animals using the images and data recorded by the CT and visualised on the screen. The new trial, with the cooperation of Texel sheep breeders, will test whether, by comparing muscle weight against live weight, they can create an index for selecting rams producing slaughter lambs which produce more meat with less waste. Dr Lutz Bunger, leader of the sheep genetics group at Scotland’s Rural College, said: “The trait we have chosen is based on live CT measurements, but in principal is very similar to the way pig producers are paid at slaughter on the lean meat yield percentage. Our method is also expected to reduce carcass waste in the processing plant. It will act like a simple selection index.” During 2013 the SRUC-BioSS CT unit scanned over 200 commercial Texel rams. SRUC geneticists then selected seven with high index scores(including the Kimbolton Ram)  and another seven with low scores.  In November each of the 14 rams were mated with 15 mule ewes. About 95% of the 210 mule ewes are now in lamb and the lambs will be followed through to birth and rearing. They will be CT scanned and 30 days later slaughtered in a plant with electronic traceability to allow feedback on each individual carcass. “It is important to remember that our ‘low’ rams are not low value rams,” says Lutz. “They had been selected for CT scanning by their owners who believe in their breeding potential. Our trial is looking for a particular trait involving many genes so there is no simple test. However the CT scan allows us to measure the results of all the genes involved and their interaction and identify rams with the best results. The trial will demonstrate the effectiveness of this method and will be another example of a fruitful collaboration between Texel breeders and SRUC.” Nicola Lambe, sheep geneticist at SRUC, is curious to find out how the lambs change in response to the selection of their sires. She said: “It is a one generation selection trial, but the selection trait we are studying has a moderate heritability (h2 = 0.38) so at least some of the benefits should be passed on. The offspring of the high sires are expected to have approximately 0.6 kg more meat when deboned.” Kirsty McLean and John Gordon from the SRUC scanning team are responsible for overseeing the care of the ewes and have been happy with the mating performance of the rams and the number of expected lambs. The results of the experiment should be available in autumn 2014. 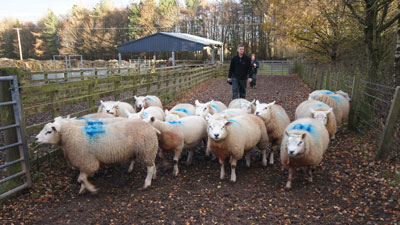