The Kimbolton Flock has been selected to participate in a ground breaking genomic research project aimed at identifying the genes that are significant in both mastitis and foot-rot resistance.

As one of twenty flocks nationally our sheep will be monitored and sampled in 2015 and 2016 with the outcome being that our flock will become one of the first in the UK to have Genomic Estimated Breeding Values (GEBV’s) for these important welfare traits.

When proven this technology will allow us to DNA test rams for resistance to both mastitis and foot rot allowing us to have confidence that their progeny will be less susceptible to these traits. 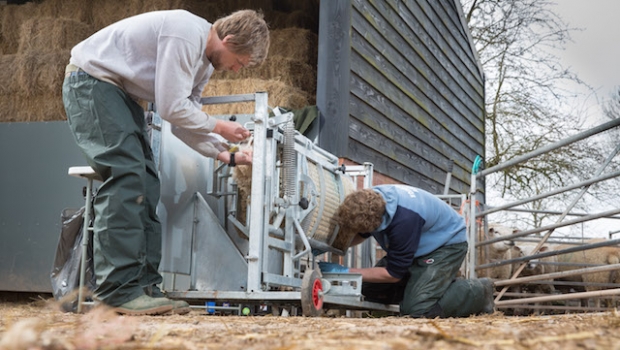 But what is Genomics?
Genomics is a term which is increasingly being used in livestock breeding, but just what is genomics and how can we use it to further Texel breeding?

Put simply, an organism’s complete set of DNA is called its genome and virtually every single cell in the body contains a copy. Genomics is a term that was developed in the 1980s and describes the large scale sequencing and analysis of DNA.

The key distinguishing feature between genomics and genetics is that genetics investigates the activity and composition of a single gene whereas genomics includes all genes and their associations in order to recognize their collective influence on the development and growth of the organism.

Through genomics researchers aim to determine complete DNA sequences and perform genetic mapping to help understand the relationships between genes and important traits, such as disease resistance and levels of production.

The knowledge about gene interactions that has so far been gathered has led to the emergence of new areas of study such as ‘functional genomics’ where researchers try and understand the pattern of gene expression, particularly across different environmental conditions.

Importantly, the science of genomics is applicable to animals, plants and humans. Genomics are also being used in human medicine and researchers are using the tool to study the role that multiple genetic factors acting with the environment play in complex diseases.

In June 2014 it was announced that researchers had sequenced the complete genome of sheep. Carried out by an international team of researchers the project took eight years to complete and involved 26 organisations across eight countries.

The Texel breed formed the basis of this work and the Texel Society is capitalising on this new technology and has become the first breed society in the UK to begin developing genomic tools. Funding has been awarded to the Texel Society in-conjunction with SRUC to undertake a genome-wide search for the genetics associated with resistance to mastitis. The intention is to expand this work to other disease related traits, such as footrot, in the coming years. You can read more about the current mastitis project here.