Today we had the third visit as a part of our involvement in an Industry leading project being led by the British Texel Sheep Society that is designed to  identify the genes that are significant in both mastitis and footrot.

This is important on a national flock basis (all breeds) as it has been calculated that mastitis alone (acute and sub acute) effects up to 30% of all breeding ewes. This has a massive financial impact on its own but when combined with foot rot which costs about £5 per lamb and £7 per ewe the opportunities to improve both animal welfare and profitability are significant.

As a part of our visit all of the breeding ewes were examined and measurements were taken on a range of data point that included;

Each ewe also had a California Milk Test (CMT) performed to identify penside if mastitis was present and milk samples were also taken to allow an accurate somatic cell count to be understood.

Also while the ewes were being inspected the feet were checked for any abnormalities and signs of footrot and anything noted was scored.

Following today our fourth and final visit has been scheduled for after weaning when the whole process will be completed again. Then all of the data collected over both of the years that the project has been running will be passed to the geneticists of SRUC who will assess it and look for correlations that will enable Genomic Estimated Breeding Values (GEBV’s) to be produced.

As a result the Kimbolton Flock will be one of the first in the UK to be able to sell sheep with GEBV’s for hard to measure health related traits.

Pictured below is Will Sawday the Technical Manager of the Texel Sheep Society performing the data collection. 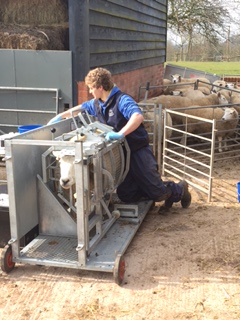 In order to ensure that the ewes produced enough milk for samples it was requested that the lambs be removed an hour before Will arrived. This was duly done but I still have the headache due to the amount of noise they made! 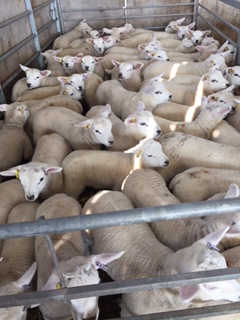 The attached Poster explains more about the project in summary, however if you prefer more information then you can read the attached document  that has more detail.