An important part of performance recording is the collection of lots of data (or phenotypes). This starts by weighing lambs on the day following their birth,  again at 8 weeks of age and again at 21 weeks.

This information is then combined with scanning information (both ultrasound and CT) to produce  Estimated Breeding Values or EBV’s. These figures can then be used to determine the genetic potential of the animal and to compare it to other sheep within the Texel breed that also record (and also potentially ones that don’t but the accuracy is usually so low that this is risky).

When collecting the data we try to avoid over handling and stressing the lambs so they get weighed as a single group on the same day. For the 8 week weights this date is chosen when the lambs are between 42 and 84 days of age and when completed it is easy to calculate the 56 day weight so animals can be compared on a like for like basis (i.e. all the same age). This is particularly important as in non recording flocks it is easy for smaller superior later born animals to be overlooked in favour of the larger earlier born animals who are perceived to be better simply because they are older and bigger.

Our physical 8 weeks weights this year have been pleasing when you consider that the grass hasn’t really got going. Our decision to feed the ewes well in the first four weeks has paid off as they have milked well and in turn the lambs have grown well with several breaking the 500g/day DLWG. Weaning is approaching for the first batch and then it will be interesting to see growth rates to 21 weeks.

Pictured below is one of the top performers so far PPK1600626 who is a naturally reared Kimbolton Va Va Voom son. 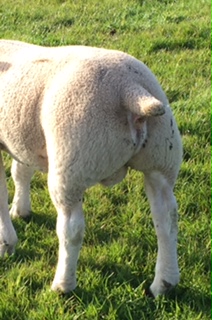 The raw data has been submitted for evaluation and we await with interest to see how our lambs will compare to the other 230 Texel recording flocks.